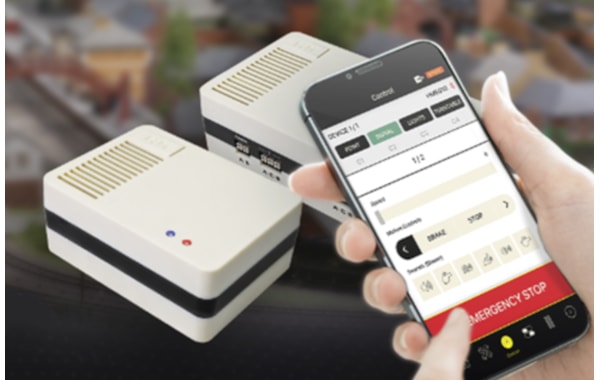 This amazing app development does literally put train control in the palm of your hands. The app operates via a smart phone or most tablets and is capable of using up to four HM6000 app base units to control 8 independent analogue circuits.

The simple on-screen display offers simple slide control for each circuit allowing for the varying of speed, direction, acceleration as well as deceleration, plus a brake function for those small emergencies. Also included in the software are typical sounds associated with steam, diesel and electric locomotives.

But that is not all, with the addition of three HM6010 accessory base units up to twelve electrical accessories can be operated no matter where they are situated on the layout, be it the lights, colour light signals, operating accessories or point motors - they can all be operated via the app.

The new and exciting features do not stop there, also included in the app is a very intuitive Track Builder programme which already has a variety of Hornby layouts loaded that the user can add to or just build their own from scratch.

‘With the HM6000 I believe controlling an analogue layout has entered a really exciting era,’ explained Simon Kohler. ‘With this App, the operating of an analogue layout has at long last entered the 21st century. Gone are the days of just controlling the forward and reverse speed, now with the HM6000 you can alter top speed settings, vary acceleration and deceleration speeds, not to mention having loco sounds, and all this via a smart phone or indeed most tablets. And let’s not forget the controlling of accessories or even the Track Builder. Now that is tremendous fun!’

For a closer look at the HM|DC App control, visit the Hornby YouTube channel and watch the tutorials to see just how amazingly innovative the app really is.

For more information about the HM|DC App control, HM6000 Base Unit and the HM6010 Accessory module visit www.hornby.com or contact your Hornby stockist.