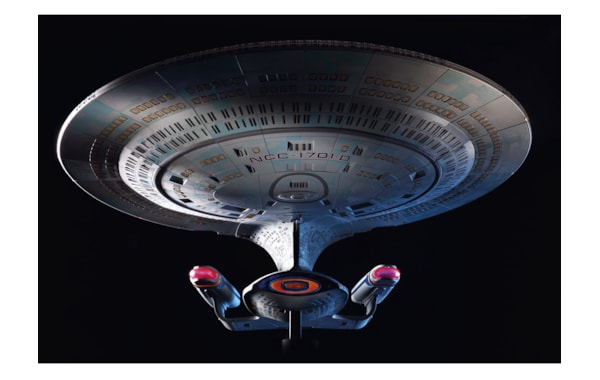 With Star Trek Day fast approaching, it seems very timely to highlight an impressive new diecast model build of the USS Enterprise, now offered by Eaglemoss. The 8th September each year is an annual celebration of the date that the first episode was broadcast in 1966.

The model is based on a careful study of original studio models. The makers of Star Trek: The Next Generation actually used three different models of the Enterprise-D, all of which were subtly different. A six-foot version was built, that could separate, and a less elaborate two-foot version was made at the same time that could be used for more distant shots. For the third season, the VFX team built a new four-foot version that was easier to use.

Pulling elements from all three original models, the Eaglemoss model comes with fully functioning working lights and has been designed to look as much like the onscreen version as possible. Features include intricately-painted hull panelling, screen-accurate Starfleet decals, working navigation lights and scores of lit-up windows.

For more information about this amazing model, visit the special website at https://en-gb.eaglemoss.com/hero-collector/star-trek/uss-enterprise-build.