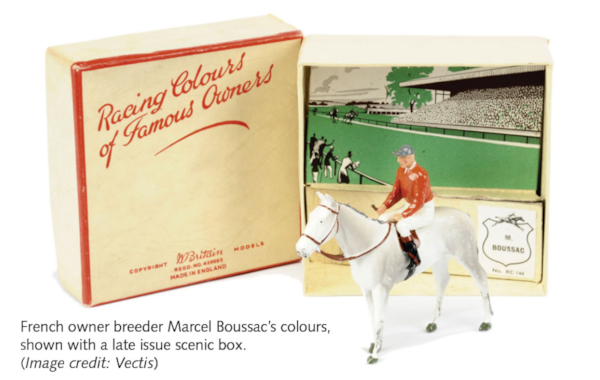 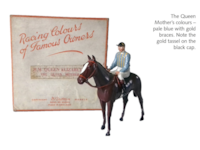 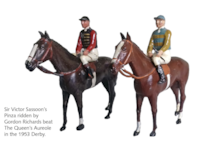 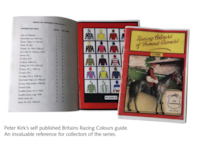 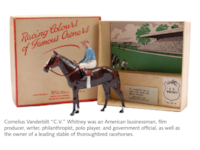 In 1925 the William Britains Company, famous for it’s lead soldiers, decided to launch a new series of civilian figures. Having already had success with their hugely popular and equine related Hunting series, and having produced sporting figures of a footballing and cricketing nature since the turn of the century,  Britains had now realised the potential for a horse racing series.  This was to be titled “Racing Colours of Famous Owners”.

Britains sensibly chose the first releases to be some of the leading owner-breeders of the era:  King George V,  Lord Astor, Lord Derby, Lord Rosebery, Lord Londonderry and Lord Woolavington.

The first six released all carried the same reference or model number of #237 and were in slightly larger scale than the 1/32 gauge that the majority of the Britains civilian figure range was scaled to. Subsequent releases used the catalogue number #1463. From 1951 onwards Britains changed the numbering system to use an RC pre-fix followed by a model number for each specific owner,  starting with The King as RC1,  Lord Astor as RC2, Lord Derby RC3 etc.

Between 1925 and 1960 Britains would release upward of 250 individual owners colours.  Sixty three of these were advertised at various times in the annually produced Britains trade catalogues.  Production quantities of these are not known, suffice to say that these are the less difficult ones to track down for collectors today.  Of the ‘uncatalogued’ jockeys, the production levels varied from as low as 1 or 2 per colour, through to dozens or several hundreds.    The reason being some of these were produced by Britains as part of a production run following the emergence of a new and successful owner, whereas others would be commissioned by an owner, trainer or enthusiast who wanted a specific set of silks re-creating.  An all white silks jockey was also available so that your average ‘over the counter’ customer could re-paint it to the design of their choosing.

Much of the work in identifying which colours were released, and to some degree in which year, was done by Britains collector Peter Kirk who documented these details in his extremely useful and self-produced  colour reference guide “Racing Colours of Famous Owners”.  Mr Kirk gained much of his knowledge from partaking in Christies 1994 auction of Britains archive material in which a number of sample cards were auctioned. Even so, several of the sample cards were found to be incorrectly labelled (sample cards being boards with several jockeys attached and maybe 1 or 3 horses). Some of the more common errors appear to have been the result of jockeys being removed by the original salesman and subsequently incorrectly re-strung against the wrong name.  Mr Kirk did much to correct and amend these errors through his research of the British and American racing manuals.  Another common error on the sample cards were misspelt names of which again many were identified and corrected.

There were two key periods in the production of the Racing Colours series, Pre- and Post- War. Production actually stopped in 1941 and did not begin again until 1951. In 1940 American racing colours were introduced for the first time.  In 1958 a small number of Canadian colours (8 in fact) were introduced and although catalogued by Britains are still some of the hardest to find.  Production on the series finally ceased in 1960.

Pre-War releases came in a white box with a blue or black label applied to the front.  Post-war boxes were an off white beige colour with a printed title and red printed border.  If the colours were mass produced the owners name is often printed directly onto the box as well.  It is equally common to see the owner’s name applied in the form of a printed sticker.  The very last boxes produced between 1958 and 1960 were slightly deeper as they included a scenic background insert that the figures could be displayed against.

The shape of the lead models never changed throughout the series although the paint styles varied slightly.  The horses were always generic and not intended to represent any particular racehorse.  The horses logically came in 3 colours: brown, grey and black. Brown was most common with shades ranging from chestnut through to bay and a true dark brown. All had black tails, black pleated manes and black hooves.  They also all had a white stripe on the face and any number of white painted “socks” (lower legs). The earliest brown horses sometimes had a very reddish tinge to them with slightly false looking red/orange mouths and nostrils. The grey horses ranged from almost white through to sandy colours to a  bolder more true grey.  Grey horses were very popular with customers and a disproportionate amount of greys were produced for sale than would be found on the racecourse (about 3% of racehorses are grey).  Retailers were not averse to swapping the horses around in the boxes to suit a customers purchasing preferences.  Black horses with grey hooves and a white stripe on the nose seem to be the rarest of the colours.  My own collecting experience would suggest the ratio of brown to grey to black to be about 75:20:5.

Air brushing techniques were used on the horses starting in the early 1930s which improved the realism somewhat. All post-War horses had a noseband painted as part of the bridle whereas pre-War horses did not.

It is quite hard to find mint examples of the Racing Colours series although they do of course exist. Flaws to look out for when buying today are repairs to the jockeys legs, the end of the jockey’s whip is often missing, being a fragile point, and cracks and stress damage to the horses undercarriage.

Although the majority of the owners colours have passed into the history books for now, a few of them can still be seen on the racecourses to this day.  The most famous being The Queens colours,  that she herself inherited from her father King George VI.  The colours first being registered by King Edward VII in 1875.  The Aga Khan’s chocolate and green hoops were later used by his son, Prince Aly, after his death in 1957, and subsequently passed to the current Aga Khan IV in 1960 following Prince Aly’s death.  The current Aga Khan used these as his second choice colours for many years when he had two runners in a race. The colours were carried by 1988 Derby winner Khayasi and 1999 Ascot Gold Cup winner Enzeli amongst others.  Lord Derby’s black jersey white cap colours were still being used by the current Lord Derby in the early part of this century and were carried by his champion filly Ouija Board.