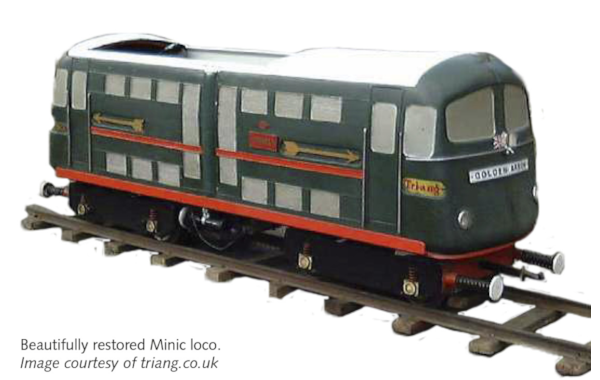 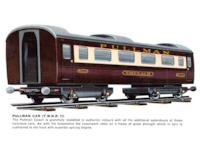 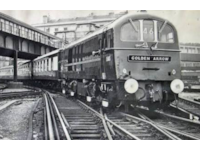 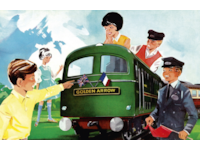 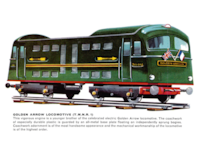 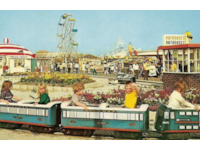 For the young, fully certified, swivel eyed train nut, an 8 by 4 layout was never going to be enough. If it hadn’t been for the complexity of the joinery, and the inconvenient requirement of being able to get in and out of the bedroom, the FCSETN would have had a spur running out across the landing and round his sister’s bedroom before his mother could say “Right, that’s enough, I’m making an appointment to have you tested”.

The lively train-obsessed mind next alights on the garden. “That rockery could be an embankment, and the compost heap is going to require a tunnel under it”. Then it occurs to you, while you’re at it, you might as well go up a gauge. And then your fevered imagination reaches the logical conclusion; what about making it large enough to ride on?

There are several recognised gauges employed in ride on railways. 5 inch works quite well, as long as the track is raised up on piers, so your legs can straddle the seat and dangle down to the running boards.

Next up is 7¼ inch, which is wide enough for vehicles you can (gulp) sit in. Of course, all these types of railway are not really toys. They inhabit a nether world which touches on model engineering, live steam, rideable miniature railways and amusement parks. The sort of trains that could sever a finger if you were careless enough to leave such an appendage on the track. No one would be crazy enough to make a ride on train set for the domestic market, would they?

Well actually someone was, and they did!

By 1963, the Lines Brothers toy empire was in full cry, with Scalextric and Tri-ang trains in both OO and TT gauge. They also had a factory in Belfast producing Spot-on cars and dolls house furniture, and the Minic factory in Canterbury. Here they produced Tri-ang Minic ships, and Minic Motorways, a realistic slot car system which dovetailed with Tri-ang Railways. That year, they embarked on a most ambitious and unusual project; the design and production of a 10¼* ride on railway which could be run in a suburban garden. The eventual system extended to a locomotive, a coach and track. This was no mean feat, considering that a project like this now would involve millions of pounds worth of research, tooling and development, which would make it unviable.

The chosen loco was based on the newly introduced Southern E5001 class (later designated Class 71) designed to haul the Golden Arrow luxury boat train from London to Dover. This was a powerful loco with a striking front end design which still looks good today. Twenty-four were built at Doncaster between 1958 and 1960. Unfortunately their third rail electric power supply made them less than useful anywhere outside their Southern stamping ground. As a result, most were scrapped in perfect working order after a motive power rationalisation in 1977.

With hindsight, modelling the loco on a prototype, rather than a freelance outline, adds to its cachet and gives Minic’s model eye appeal. The body was two plastic mouldings joined together and mounted on a 3/16* steel frame bordered with 1” angle steel. The bogies had cast iron wheels with insulating bushes which picked up power from the track. The rear bogie was  powered by a DEC electric motor driving all four wheels via a chain drive. The result was a ride in loco over five feet long and eighteen inches wide, and weighing in at around 125 kilos! It was capable of eight miles an hour with a load, and could even handle a 1 in 25 incline.

The dashboard panel featured a red indicator light to show track supply and two rotary snap action switches. One had ‘Reverse/Off/Forward’ and the other was ‘Slow/Half/Three Quarter/Full. This was later modified to a simpler single switch giving ‘Reverse Full, Reverse Half, Off, Forward Half, Forward Full.’

Body detail included a screen printed ‘Golden Arrow’ headboard, body side painted golden arrows and a plaque with the letters ‘TMNR’ (Tri-ang Minic Narrowgauge Railway). It even had an adapted BR ‘lion and wheel’ emblem with a Kentish Horse instead of the lion. Louvres and windows were recessed and picked out in silver.

The prototype was chosen as it was up to date, ran past the factory and was an easy shape for tooling and production. It retailed at £110 in 1963.

Like the loco, the coach Minic chose to model also benefited from being based on a recent BR prototype, the Metro Cammell Pullman built for the East Coast route. Utilising a two piece plastic moulding like the loco body, it manages to look surprisingly authentic. The moulding was dark brown with the cream sections being painted on. Frame and bogies were the same as the loco but without any drive gear.  The coach could carry two people seated on tubular steel seats fitted with hardwood slats.

The Pullmans appeared with the names Amber, Amethyst, Emerald, Opal and Pearl. The coaches retailed at around £49.

Sectional track was made from 16 gauge folded galvanised steel screwed to hardwood sleepers. Straights were 6ft long and curves were available in two radii, twelve and eighteen feet. The only other track parts were a limited number of points, a right-angled crossing and buffer stops.

Power to the rails was supplied by a 35v 20amp transformer. The loco was not fitted with brakes but could be controlled when the direction lever was reversed.

The Minic garden railway system took up too much space to be stocked by a conventional Tri-ang train dealer. Therefore they were sold on commission and delivered from the factory, which did not endear them to the retailers. From the advertising blurb; ‘Anyone with a reasonable garden, tennis court size, can install a Minic Garden Railway.’ However it was obvious fairly quickly that there would not be a lot of sales after the initial purchase. Once you had a Minic Narrow Gauge Railway running round your garden, you didn’t need much else.

A lot of sets were bought and installed at holiday camps such as Butlins, which again limited further sales. The range was withdrawn from sale in 1965 without great wailing and gnashing of teeth. One wonders whether this chapter of English eccentricity ran at a profit or cost the company a lot of money. Possibly it just broke even.

So the upshot is, this is a train which never had the chance to become collectable. There simply weren’t enough manufactured and sold. Also it’s too big to store, and there aren’t enough accessories to keep the collecting bug stimulated. But every train collector secretly hopes they might find a Minic Narrow Gauge Railway festering in a neighbour’s shed, begging to be restored. And if you did, it wouldn’t be long before you’d hear your wife saying; “Right, that’s enough, I’m arranging to have you tested.”