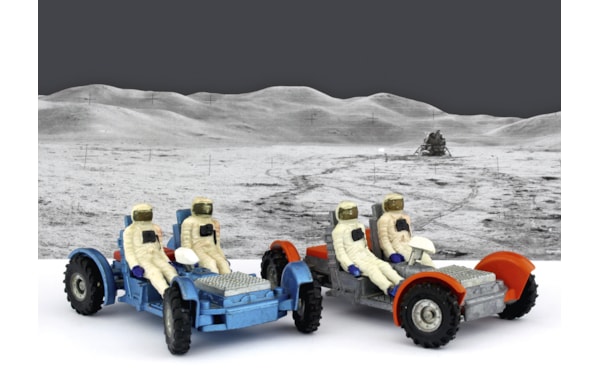 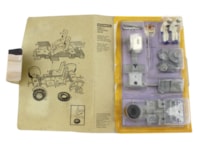 With all the recent excitement about the 50th anniversary of the first moon landing, I came to realise that I have a bit of a collection of moon-related models and here is the second instalment of a trilogy celebrating vehicles both factual and fictional on this page.

In the past we looked at Corgi’s ‘James Bond’ Moon Buggy, but this time I turn my attention to an altogether more realistic interpretation the Lunar Roving Vehicle by Dinky Toys – it’s actually a good approximation of the very buggies used on the Apollo 15 (1971), 16 and 17 (both 1972) missions.

Designed by Ferenc Pavlics and built in partnership by Boeing and General Motors, each LRV weighed 210 kg and could carry two astronauts, equipment and lunar samples with a designed top speed of 8mph. Three were constructed, one for each mission, and were transported to the Moon folded up in the Lunar Module. All three LRVs remain on the Moon.

Dinky’s simplified but excellent replica was released in 1972 as No 355, lasting in the range until 1976. With lots of play value, including four-wheel steering by a very basic but effective arrangement, these LRVs graced many a living room ‘lunar’ surface and I dare say a few earthy parts of many gardens. All metal, apart from the chunky rubber tyres and two pliable rubber astronaut figures, these have proven to be incredibly durable and many have survived today, although finding one in mint condition is quite a task.

This popular model was also released in the Dinky Kit range in unassembled form, with a phial of orange paint for the wheel arches and part of the rear body. The box art also showed the front panel in gold but you had to provide your own paint for that.