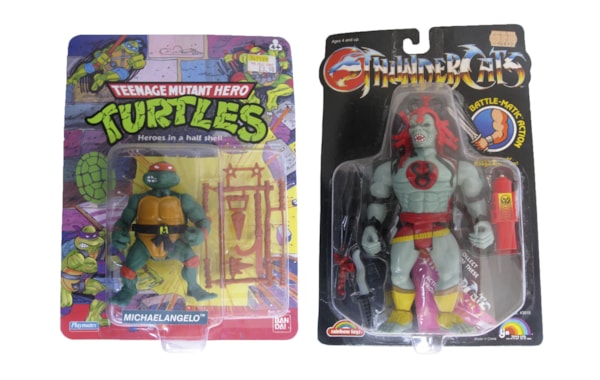 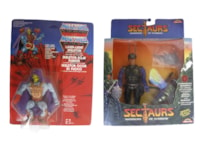 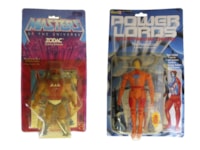 Collecting TV and film action figures from the 1980s

The Star Wars toy figure revolution had a huge ripple effect on the type of toys available from the 1980s onwards. The size of the Star Wars figures, at 3 ¾ inches, was the preferred industry benchmark but it had the drawback of being too small to get any true “action” into the figure itself. The commercial “beauty” of this line was selling the much higher price point larger spaceships and playsets which were integral to the play value and brought a much higher profit ratio. In the real world, this mattered, although not to the young boy or girl involved. The toy industry had to come up with something else but not the 12 inch style of Hasbro's GI Joe which had the opposite extreme in that any accessories were too big and expensive. The average child's toy-box was not that accommodating! Roughly halfway between was the obvious compromise so the early 1980s onwards saw a steady stream of action figure toys in 5 or 6 inch size. The action was now becoming far more important in order to challenge Star Wars domination. Some really innovative action figures were the result. The larger accessories were still available, but in lesser numbers and priced to be for a birthday or Christmas present. This shift was designed to compromise so that more figures were sold and the focus shifted to “collect 'em all” to take advantage of each figures special action and all available in the lower price ranges. Star Wars was a unique property and it is now the king of the collecting market so time (and auction prices) have proven Kenner/Hasbro to have found the right magic formula. However, many of the other 1980's lines are catching up due to these well remembered special features plus the rather ingenious play-sets made for the larger action figures which are now sought after as these were made in much smaller quantities.

From the collecting point of view, these are a much harder find complete and boxed in most cases, especially when there were many small parts to lose. Here is a brief overview of the available space themed action figure lines of the 1980s showcasing the attempts, by most toy manufacturers, to cash in on the “Star Wars effect.”

By far the most successful 5 or 6 inch line of the early 1980s was Mattel's Masters of the Universe. This set lasted from 1981 until around 1990, in various box styles and had over 70 figures plus a huge array of vehicles and playsets and even a girl's spinoff set called “Princess of Power.” It was the main challenger to Star Wars and outlasted it in the toy shops. At first, the primary action was simply one of a pull back and let go effect. More accessory weapons were included to broaden the play value, many being interchangeable and the extra bonus was a small related comic book tucked in behind the figure. Mattel, to its credit, made many different comic books related to the actual figure being sold rather than a generic one, included with every version, that the lesser manufacturers used to cut costs. Later the line incorporated far more exotic features such as glow in the dark, water squirting, transforming shape and break apart actions. This kept the Masters line refreshed in a different way from Star Wars. The play-set element was not neglected and this line must come second only to Star Wars in the number of vehicles and play-sets available. These are now very highly prized and are quite a bit harder to find.

Other manufactures soon joined in with their own take on “special features.” Revell, the plastic kit manufacturer, created the Power Lords in 1982. The main feature was a complete spin around of the figure so that you got two creatures for the price of one. It only lasted one season and rarely turns up on the original card. 1983 brought Tomy's RATS, which were a cross between action figures and transformer style robots. The main selling feature was wind up weapons that spun. It did not last long either. The big hit of 1984 was Coleco's Sectaurs which paired aliens with insect companions. These came with an absolute host of weapons and equipment as well as the obligatory comic book. There were even very large sized furry bugs based on a glove so you could frighten your little sister! 1984 also brought figures from the Dune movie which were just standard action figure, their special feature simply being the film/book tie in. The fame of the book was the anticipated draw as well as the huge special effects of the movie. 1985 brought Galoob's Defenders of the Earth. This was a comic book/TV cartoon series tie in with Flash Gordon and friends from the King Features line. This came from the early days of comics and had popular, though second tier, heroes and villains such as the Phantom and Ming the Merciless.  The biggest hit of the year was a Masters of the Universe style TV cartoon show called Thundercats. The figures were hugely popular, despite not having the depth of different actions, so the series only lasted until 1987. There were several vehicles and one huge playset and it even tried to replicate Star Wars with a miniature line spinoff at a lower price point. The potential seems to have been lost as this could and should have continued. Like all action figures, another series was planned and all that is left are a few prototypes and unused artwork to show what might have been. The two series of Thundercats are some of the most fondly remembered figures of their time and are now hugely collectible.

1986 brought another new wave of interesting figures. Kenner, having finally dropped Star Wars, came up with the Real Ghostbusters.This was another huge hit and the series lasted until 1990. All the figures came with companion ghosts and most had special effects such as fright features, slimed heroes, backpack heroes and screaming heroes. They all did exactly what it said on the box. The same year, Tonka came up with the Supernaturals which combined figures, ghosts and 3-D hologram effects. Whilst this series was short lived, the 3-D hologram effect was revived in 1988 with Hasbro's Visionaries. These were far more successful due, once again, to a popular cartoon show but they still only lasted for one season.

Numerous other series filled the toyshops. Transformers, Inhumanoids, the Super Powers collection from DC comics and Marvel comics reply in the shape of Secret Wars. Silverhawks. Indiana Jones, Blackstar. The Black Hole, the list is endless. All were available for a short time then simply faded away. Both the DC and Marvel heroes would return later once the blockbuster movies started.

There was one final massive hit from 1988 which is still with us today, the Teenage Mutant Ninja Turtles (or Hero Turtles as they were originally known in the UK). This spawned one of the largest lines of action figures with new series coming out three or four times in a year. The Turtles were linked to movies as well as comics and the sheer force of their “personalities” kept the line going.

Early boxed figures are now hard to find. All these figures were bubble packed so finding an unopened one can be quite a challenge. Beware of “resealed” items where they have been popped back into their box. The giveaway is the rip marks from its first opening and weapons missing. In future years, action figures will undoubtedly take over from Dinky and Corgi as the “must have” collectible. The days of opening the box, playing with the toy, then popping it back in are gone.