King for a day - Looking at Lesney King Size 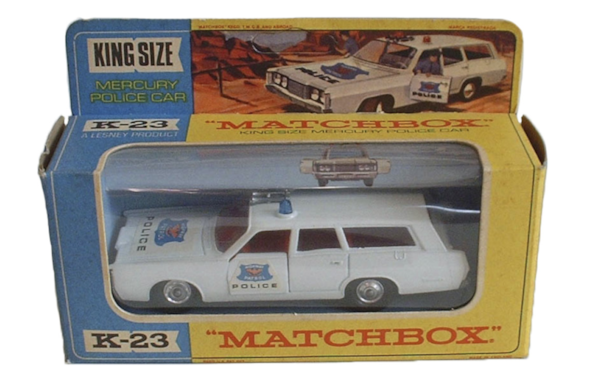 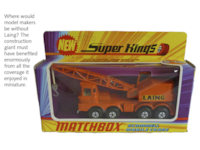 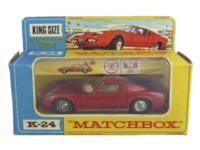 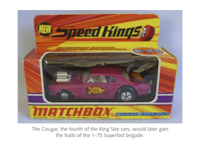 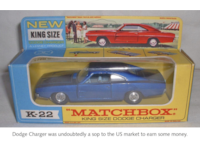 If space is at a premium in your household, then skip this article and move on to the next. After all, when Lesney bit the bullet and decided to build its models in a larger scale, it was immediately alienating all those schoolboy pockets – and I don’t mean only in terms of cashflow. Bigger models (the King Size range works out at around 1/43 or so) meant bigger boxes; this did, however, give the Matchbox artists more scope for their illustrations. And they needed it: after all, they were fighting the likes of Corgi and Dinky and Spot-on, and that was only the homegrown stuff…

In my last article I speculated on the reasoning behind the Major series, a range that would, fairly quickly, be subsumed by the King Size label. King Size, as you may well know, developed into Super-Kings and Speed Kings in the fullness of time, and I will touch on this briefly later.

There’s more than a passing similarity between the King Size and the Majors. For starters, this range (which finally petered out in 1970) focussed largely on the building site type machinery, as well as articulated transporters. All of these types of model had featured in the Major range, so no new ground was really being broken here, if you’ll pardon the expression. Like the Majors, one or two numberings were re-used, making the overall range bigger than it might first appear. Essentially there were 20 K numbers until, right at the end, Lesney decided to plunge into the car market, introducing the Mercury Cougar, the Mercury police car, the Dodge Charger and the Lamborghini Miura – an eclectic choice, if ever there was one.

Rockertron’s Graham Hamilton feels that these last gasp additions might well have been an attempt to go mainstream and steal some of Lesney’s competitors’ limelight; whatever, only four cars were released, all in 1969, thereby giving them relatively short runs. He also affirms that Lesney was streets ahead when it came to the subject of quality of castings. At some point the company had been visited by the Dinky hierarchy and these latter came away impressed with the extremely high standards of finish and detail that the Lesney product boasted.

A words on values

So what about values? Look through any price guide and you’ll note that these models are not going to break the bank. For the most part there are known, catalogued variations, but nothing approaching the sheer breadth that collecting the 1-75 range entails. Wheels are less of an issue here; hub variations can be found, yes, but in the main there aren’t too many options to worry about. Paradoxically, this might be one reason why King Size values have remained in the doldrums: in the absence of real rarities and casting aberrations or strange hues, there’s less to get the collector hot under the collar. Was quality control at Lesney better by then? Possibly. Of course, with a smaller basic range, and a range produced in less quantity, then it stands to reason that the Friday Afternoon Jobs were commensurately fewer and so the margin for error was thus reduced accordingly.

Interestingly, Graham has found that people who collect King Size don’t go for Super-Kings and vice versa. These are niche markets, as mentioned in my last article on the Majors. To my way of thinking, the King Size are something of a sleeper. Their quality is self-evident, the subject matter interesting (car transporters and earth moving equipment have great visual appeal) and with the later versions, there’s some great box art thrown in to the equation, too.

But by 1969 the writing was on the wall – or rather, the wheel. Mattel’s outrageous trans-Atlantic products were quickly dominating young male car collections: Hot Wheels was a definite wake-up call for the UK model car sector, and so Lesney tooled up for the Superfast range in its 1-75 series. A year later the King Size models followed suit, with the not terribly inventive moniker of Super-Kings. The range was noticeably bigger, predominantly encompassing haulers, trucks and many more cars, and they boasted slicker wheels – but beyond that, I personally cannot see much to write home about. Like them or loathe them, the fact is that for many a moon they have been considered more “toy” than “collectable”. They’ve been out in the cold for a long, long time, but according to recent auction results, and talking to experts like Graham, all that is beginning to change. And part of this is to do with the packaging…

Looking back, the adoption of the window box by Lesney was a mixed blessing. Collectors could see the goods and indubitably this helped the point of sale but at the same time, cellophane was an inherently fragile material, and easily ripped. Window boxes don’t tend to stand the test of time very well, especially when they’ve been transported here, there and everywhere. The bigger boxes (containing gift sets) are even more prone to accident. There may have been precious few varieties to tempt the collector in the Super-Kings range but it’s the early, transitional models that are now being sought out, in much the same way that the market for transitional Regular wheels to Superfast wheels has become established in the 1-75 series. Mark my words – these models are gaining in value, mainly because relatively few seem to have survived in that new-fangled packaging.

So in closing, whilst I cannot presume to advise readers on toy investments (if I could, I wouldn’t be filling my spare time at the keyboard), quite clearly there is more to Lesney than its diminutive first series…