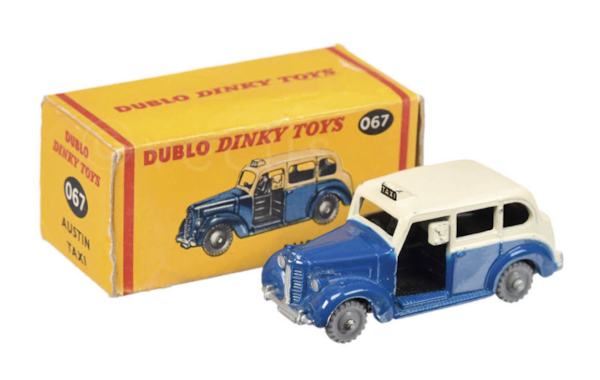 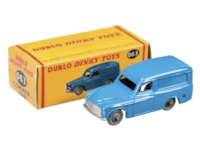 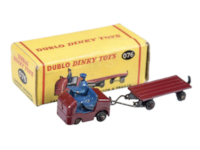 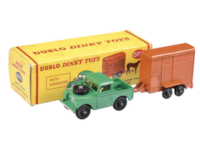 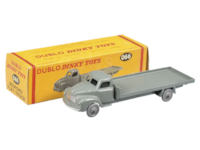 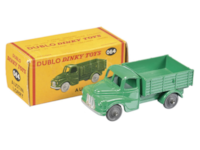 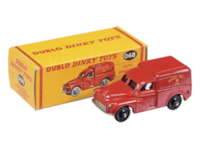 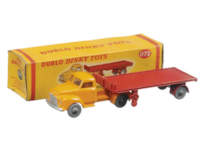 Hornby Dublo model railways were launched in 1937, one year after the death of Frank Hornby who passed away on 21st September 1936. The Chief designer of the range was Donald Smith although the catchy name of ‘DUBLO’ was the brainchild of Meccano’s Commercial Director George Jones.

Hornby Dublo was an amazing success right from the beginning although kids who enjoyed this exciting new gauge of model railways had a bit of a dilemma when it came to accuracy of scenery and in particular road vehicles. One of the most frequent questions being asked was which motor vehicles correctly fitted the 00 scale? Enquiries by boys to Meccano Magazine were frequent both in the pre-war and immediate post-war years. The editor published replies to readers advising them that there were a number of accurate options available in the Dinky Toy range. His suggestions included the No.22c Motor Truck; No.29c Double Decker Bus; No.29b Streamline Bus; No.29g Luxury Coach; No.29e Single Deck Bus; No.35a Saloon Car; No.35c MG Sports Car; No.35d Austin Seven and even the No.25r Forward Control Lorry based on the modern looking Leyland Beaver. In truth, however, only the Single Deck Bus (No.29e), Double Deck Bus (No.29c) and Luxury Coach (No.29g) were truly to the same scale as Hornby Dublo. In one reply it was recommended that the pre-war Mechanical Horse combinations might look right if used on Dublo layouts as long as they were not positioned too near to the locomotives! It seemed like Meccano were not that bothered. There was a distinct lack of any road vehicles at all on many Hornby Dublo publicity shots that appeared in Meccano Magazine.

Two decades of Hornby Dublo production were to pass before Meccano decided to re-visit its pre-war concept of producing modelled miniatures specifically aimed to fit a railway layout, albeit by now one of a much smaller gauge.

The first three Dublo Dinky toys were advertised in the December 1957 issue of Meccano Magazine and arrived in toy shops sporting new smooth grey one-piece plastic ‘non scratch’ wheels. These smooth wheels were rather unrealistic however, and not very well received at the start of production. So by December second drawings were made for new wheels to be made, each with 20 treads, thus making them much easier on the eye although these would not be fitted to the first Dublo Dinky toys until March 1959.

The first three toys in the series were No.064 Austin lorry in green, No.065 Morris pick-up in red and No.066 Bedford Flat Truck in grey. The first two had a retail price of 1/9d whilst the Bedford Flat Truck cost 2/-. All were fitted with the smooth grey wheels although some were given black painted tyres to add more realism. The flat truck was designed to carry the British Railways container load from the Hornby Dublo system although some collectors thought this made the lorry look rather too long and a bit out of proportion.

In March 1958 three more Dublo Dinky models were introduced, the first being 061Ford Prefect in beige, followed by No.062 Singer Roadster in yellow and red and No.063 a Commer Van in light blue. The Ford Prefect only remained in production for one year and the other two were both deleted from the catalogue in 1961, suffering similarly short production runs. At this time Matchbox were dominating the market for small scale diecast cars so it could have been that sales of the Dublo Dinky Toys were simply too slow. They were also more expensive to buy. It is known that retail price reductions were made to Dublo Dinky Toys by Meccano around two years after production began so pricing clearly became an issue.

In March 1959, the new treaded wheels were introduced on model number No.067 Austin Taxi. This proved to be one of the most popular of all Dublo Dinky toys, always appearing in two-tone blue and white. April 1959 saw the release of No.068 Morris Minor Royal Mail Van which was the first Dublo Dinky to sport smart plastic windows. In June of 1959 another version of the Bedford truck also became available, this time as an articulated Mechanical Horse type tractor-trailer unit designed, as with the flat bed lorry, to carry a railway container. The tractor was always yellow and the trailer red.

In September of 1959 a complete change in direction saw the release of the first agricultural model in the Dublo Dinky series. This was a charming little Massey-Harris-Ferguson tractor 069 that for some unknown reason always appeared in blue rather than the Harris/Ferguson standard colours of red and grey. This tractor sold for 1/6d and was also paired up with the Hornby 4649 low sided goods wagon in the Hornby Dublo range. A hole appeared on the driver seat but no driver was issued with the model. A month later the tractor was joined by an AEC Mercury Petrol Tanker No.070 in Shell/BP livery of red and green which cost 2/6d was in production for four years before being deleted from the range in 1964.

Dublo Dinky fans were treated to something a bit different in February of 1960 with the arrival of a Volkswagen delivery van No.071 in bright yellow with Hornby Dublo livery on its sides in red. This vehicle was one of the longest lasting of all the Dublo Dinky series surviving eight years until its final deletion in 1968.

In June 1960 attention was turned away from the road and towards railway platforms with the release of a Lancing Bagnall electric tractor and trailer set 076 in maroon with black wheels. These sets were produced for six years after which the trailers were made on their own right up until 1970.

The final model in the Dublo Dinky series was No.073 Land Rover issued in September 1960. This was a most attractive combination of a Series Two Land Rover towing a double-axle Smith & Co CT86 Horse Box complete with removable horse which came in light, medium or dark tan plastic. Colour variations of this model are known as it had long healthy production run.

Models were never allocated to numbers 074, 075 or 077 which begs the question of what might have been had the range continued and been more successful. Dublo Dinky was launched at the peak of the popularity of the Hornby Dublo system along with the new range of super detailed model goods wagons. These were prompted by British Railways modernisation plan of 1955, which saw the introduction of modern bulk wagons for the transportation of all manner of goods including flour, grain and cement. It is thought that Meccano had planned the release of a new Dublo-Dinky ‘Prestflo’ bulk cement tanker to compliment the new rolling stock but this never materialised probably due to financial constraints. It is also widely believed that there was a plan to market the Land Rover separately from its horsebox as two individual models and also to market the Lansing Bagnall trailers individually as these were always in demand by railway modellers. They did actually appear in trade cartons of six until 1970.

Only five Dublo Dinky toys remained in production following the Lines Brothers takeover of Meccano in 1964.

Assembling a complete set of Dublo-Dinky toys is not too difficult as there are only fourteen different models to acquire and prices for them are still very reasonable. But that’s not to say that finding them is all that easy as those which had very short production runs can be hard to track down mint and boxed. There are, as is often the case, a number of wheel variations to look out for so if you take into account all of these it can boost your collection to over 40 different models.