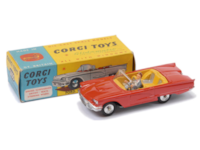 In this series featuring Corgi and Dinky toys of the 1950's to 1970’s, we 'unwrap' a few of the models and reveal a sprinkling of detail.

In this series featuring Corgi and Dinky toys of the 1950's to 1970’s, we 'unwrap' a few of the models and reveal a sprinkling of detail. It is hard to believe that these two great market leaders of diecast toys, who gave such pleasure to collectors of all ages, still manage to excite and delight collectors today.

The Packard Convertible was released by Dinky in 1955, as model No 132. This open top car has a very leisurely look about it, as we imagine it cruising along the highway. It was issued in light green with a red interior, black folded hood, and red hubs. The Packard came with a driver figure wearing grey. This fabulous car had a tinplate base and no suspension, and was withdrawn in 1961.

Dinky released the Dodge Royal Sedan in 1959, as model No 191. According to the Ramsay’s Guide, it was issued in six different variations, with four different box types. It is surely the pale green version with black tail flash that we all remember. This elegant car had no interior or suspension but was issued with aluminium hubs, white tyres, and a tinplate base. It was finally withdrawn in 1964.

A truly colourful delight was released by Dinky in 1960, in the shape of the Plymouth Taxi, model No 265. This lovely car was particularly shapely with those distinctive tail fins. It was finished in complementing colours of deep yellow with a red roof, silver trim, aluminium hubs, and white tyres. The taxi had a sign on the roof of the cab, and the fares charged are listed on the doors – both features add a realistic touch of detail. It had a cream interior and was manufactured with a tinplate base. The Plymouth Taxi was available for one year only, and is now quite a hard model to find.

The Plymouth Fury Sports was released in 1965, as model No 115. This model was produced in white with a red interior and silver trim. It had cast hubs with detailed tyres, and carried a driver figure and a passenger. This car is a later version of the 1963 model, and was sold in a yellow carded box with an all over window, which was not particularly sturdy. The car itself is large and rather stunning.

Our first Corgi is the Chevrolet Impala, released as model No 220 in 1960. This sturdy looking car was issued in light blue with a lemon or red interior, or in pink with a lemon interior. The pink car is supposed to be the harder version to find. Both models were finished with silver trim, and had either flat or shaped hubs. The interior was a simple vacuum formed mould, showing the seats and surround, together with a grey plastic steering wheel. This model had a diecast base in grey and the very latest ‘Glidomatic Spring Suspension’, which made any test drive a rather comfortable experience. The Impala was available until 1965.

Corgi released the Ford Thunderbird Open Sports in 1962 as model No 215S. This open sports model was issued with a red body and a yellow cast interior, with silver seats. It was also fitted with Glidamatic Spring Suspension, together with a new set of shaped hubs. Such a luxurious model as this one, came with a smartly dressed removable plastic driver. It was issued in a 1:48 scale, with the familiar grey diecast base. It proved to be a popular model and achieved 366,000 sales during the three years that it was available until 1965. It was issued in red with a yellow diecast interior and silver seats.

An Open Sports model of the Ford Thunderbird was first released in 1959, as model No 215. This earlier car was issued in white with a blue diecast interior and silver seats but had no suspension.

The Chrysler Imperial Convertible was released in 1965, as model No 246. This was another popular Corgi toy with a variety of features. These included: opening doors, boot and bonnet, together with a driver figure and a passenger. The real surprise, however, was a set of golf clubs, which fitted neatly into the boot – great feature. The model was available in red with a light green or light blue interior. It can also be found in the much rarer colour of Kingfisher blue. The interior also had moveable seats, together with a detailed dashboard. The blue and yellow box has a colourful illustration of the Chrysler Imperial. The picture of the car can be found in red or green, which is somewhat unusual.

In 1967, Corgi released the Lincoln Continental Executive Limousine, as model No 262. By Corgi’s standards, this car was particularly large, long and very luxurious. It also had a number of special features. The vehicle was available in metallic bronze with a black roof and deep red interior, or in light blue with a beige roof and blue interior. Both cars were carpeted (flock sprayed) in their respective colours, and had opening doors, bonnet and boot. All the trim was in chrome, which incorporated jewelled headlights. As well as all these various refinements, the rear passengers, also had a working television at their disposal. According to the Great Book of Corgi, a 'strip of opaque, coloured pictures' was supplied with the car. Each of the pictures could be 'inserted at the front of the screen to give the appearance of a colour TV'. Access to the battery unit was via the base of the car.

The American cars, which were produced and released onto the home market, were a consequence of a good deal of American TV series, during the 1960’s. The toys emulated the cars themselves, they were large, with vast areas of chrome or more likely, silver trim, spread across the bumpers to the front and rear. Also present were the tail fins and side flashes. Whether you were in a Dinky or a Corgi, you certainly had a greater share of the road in any of these American cars.