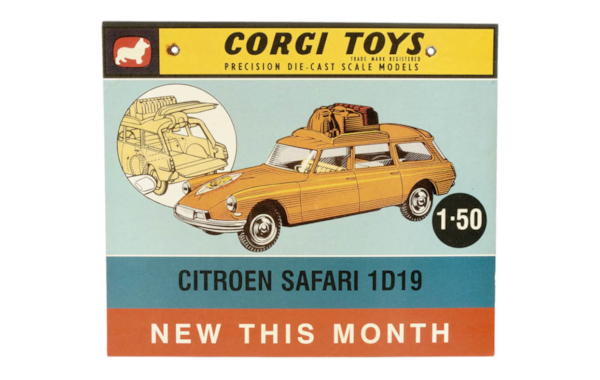 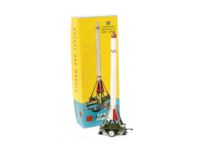 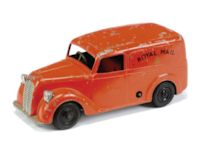 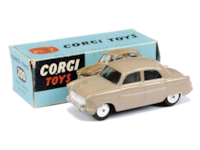 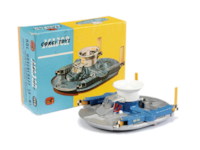 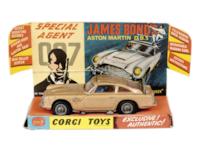 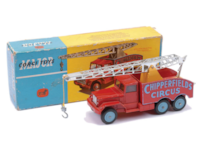 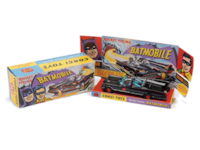 ‘Wow, they’ve got real windows!’ Words that were no doubt heard in toyshops all over the land in the summer of 1956 when millions of kids got their first glimpse of Corgi Toys. They were certainly eye-catching with those natty silver spun aluminium wheels, real plastic windows, bright two-tone paint finishes and attractive boxes and at three shillings a-piece they were just about affordable from your pocket money.

My first ever Corgi Toy was the Chipperfield’s Circus International Crane I remember receiving it from my mum and dad and excitedly unwrapping it at my fifth birthday party. This was soon followed by the Fordson Major tractor, which had fantastic play value with its lifting plough attachment and real steering! I got through three or four of those, I reckon, as the front axles always tended to wear out through constant play. Another of my personal favourites was the Ford Thames Wall’s Ice Cream Van … what a fabulous feature those working chimes were. That was the great thing about Corgi, it was always coming up with new features that got the kids buzzing in the playground.

The history of Corgi Toys can be traced back as far as 1933 when German born Philiip Ullmann formed a company called Mettoy – derived from the words Metal Toys. The factory was based in Stanley Street, Northampton and, despite Britain being in the grip of a deep recession with over two million unemployed, Ullmann managed to make a go of it producing a range of attractive tinplate toy vehicles.

Rather ironically, despite his German roots, Ullmann soon found himself supporting the British war effort following the outbreak of World War Two when the Mettoy factory was turned over to the production of Bren-gun magazines, shell carriers and land mines both at Northampton and the firm’s newly opened factory in Swansea.

Following the war, amid a fresh mood of industrial optimism, Mettoy returned to its roots manufacturing pressed tin toy vehicles once again and developing a healthy export market to the United States.

Here in Britain, Mettoy’s products were sold mainly through Marks and Spencer’s stores and it was Sir Simon Marks who, in search of a range of solid, hard wearing solid metal toy vehicles, led Mettoy to venture into the world of diecasting – an area until then largely dominated by Dinky Toys. Boosted by the enthusiasm of Henry Ullmann, the founder’s young son, and other new recruits from the Birmingham Alluminium Casting Company, Mettoy’s answer to Marks’ request was a range of diecast models called ‘Castoys.’ While sturdy and robust, Castoys were heavy and fairly crude in detail. They did, however, have one truly unique feature - an internal flywheel mechanism to power them over the kitchen linoleum! Two motorcars were released initially in 1954, a Standard Vanguard and a Rolls Royce. Despite the heavy castings being hard for the small internal mechanism to handle with any great success, Mettoy remained convinced that novel innovation was the key to its future success within the diecast market. Other Castoys followed including a motor coach, racing car and a farm tractor and they sold quite well. It was clear, however, that they were still no match for Dinky Toys.

With this in mind Mettoy decided to release a new range of toys in a similar scale to Dinky and it went in search of a catchy name. A shortlist of seventy proposals was drafted and from this list came the name CORGI. This was one of the names proposed by Henry Ullmann and seemed the perfect solution being short, snappy and representing a sturdy Welsh dog, as the new toys were to be made at the newly extended Swansea factory. The dog also proved to be a very successful branding tool when it came to marketing.

The 24 new models, each with smart clear plastic windows, were marketed by ‘Playcraft’ and launched at the British Industries Fair in February 1956. Entering toy shops for the first time in July 1956 the new Corgi models included the Ford Consul, Austin Cambridge, Morris Cowley, Riley Pathfinder, Vauxhall Velox, Rover 90 and the Hilman Husky. They were instantly popular, and within five months a Corgi Model Club was launched. Application forms were tucked inside each box with new members receiving a certificate, newsletters and an enamel lapel badge.

Corgi gained a significant edge on its rivals with the introduction of Glidamatic Spring Suspension giving the toys more play value. It also released a series of toys reflecting important landmarks of transport history like the H.D.L. Hovercraft SR-N1 and ‘Bluebird,’ Donald Campbell’s gas turbine powered land speed record car, which were both hugely popular.

The 1960s saw design innovation bring novel new features to Corgi models such as opening bonnets, detailed engines, jewelled headlights and clever steering mechanisms. Having taken a considerable slice of the market Corgi now had millions of collectors eagerly awaiting each new release, and they began to appear at the rate of one per month!

‘Wow! Corgi Toys’ became the marketing slogan when they were advertised on commercial television during ‘Family Hour.’ A mobile touring exhibition van began attending large outdoor events promoting and selling models and the launch of the Corgi ‘Major Series’ gave rise to the now very sought after super Rocket Launcher, Car Transporter and Combine Harvester all with wonderful working parts and terrific detail.

Trans-o-lite headlamps, working windscreen wipers and hydraulic tipping mechanisms all made Corgi Toys that bit special and a major step forward occurred with the launch of the Chipperfield’s Circus range, also now hugely popular with collectors.

Corgi became a Public Limited Company in June 1963 and two years later entered the lucrative market of character merchandising following the appearance of the white Volvo car featured in ‘The Saint’ television series starring Roger Moore. With sales of this model exceeding one million Corgi were aware of the potential of other theme related models and wasted no time in developing them.

The next screen-based car really did strike gold for Corgi. This was the legendary Aston Martin DB5 from the James Bond film Goldfinger. Corgi designers really did rise to the challenge with this little beauty incorporating virtually all the gadgetry from the real car into a tiny model, including an ingenious ejector seat. Released in mid-November 1965 around a million of these DB5s were sold in seven weeks leading up to Christmas of 1965. Overall sales passed four million before the toy was withdrawn after four years production.

The Aston Martin was followed by Corgi’s greatest seller: the Batmobile. Demand for this was such that Corgi switched the Swansea factory to 24 hour production but it still struggled to keep up with the demand. In total more than five million Corgi Batmobiles were sold worldwide by the time of its withdrawal in 1969.

Corgi maintained its links with large and small screen favourites with models featuring The Avengers, The Man From Uncle, The Monkees and the ubiquitous Chitty, Chitty, Bang, Bang. They were all great sellers, ensuring Corgi received two ‘Queens Awards to Industry’ awards.

The 1960s ended on a sad note however when a devastating fire swept through the Swansea warehouse in March 1969 destroying an estimated whole year’s stock. Recovery from this was slow and 1971 saw Corgi make its first ever trading loss, resulting in the closure of the original Stanley Street factory in Northampton. It was also the year in which its founder Phillip Ullmann sadly died.

The toy market was slowly changing and Corgi made a move towards fast cars, space toys and models based on the popular children’s TV characters like Basil Brush and the Magic Roundabout. The Queen’s Silver Jubilee celebrations of 1977 offered a break from Hot Rods and racers with a detailed model of the 1902 State Landau, complete with a plastic figure of Her Majesty the Queen. So keen was Corgi to make sure everything was correct, designers even pondered as to what colour the Queen might wear on the big day. Initially she was moulded in yellow but later switched to pale blue. Both colours proved to be wrong, however, as Her Royal Highness actually appeared in pink. Each member of staff at the Harlestone Road factory in Swansea received a free State Landau model to keep.

As the 1970s ended British toy makers were struggling for survival as a deep recession began to bite. Rising costs coupled with a flood of cheap imports from the Far East also took their toll on the industry. One by one toy companies began to fall with the likes of Dinky, Lesney and Airfix all losing the battle for survival. By 1982 the Mettoy workforce had declined from a high of 4,500 to just under 1,000 and with escalating debts the receivers were finally called in on November 1st 1983.

The Corgi story however, as we all now know did not simply end there. In more recent times the company has happily re-emerged and is now writing another chapter in the history of British toymaking. Once again a fascinating range of super highly detailed Corgi models are sitting invitingly on the shelves of Britain’s toy shops appealing to today’s collectors just the way they did all those years ago… and long may they continue to do so.