Corgi Gift Sets: Roll up, roll up! We head to the circus 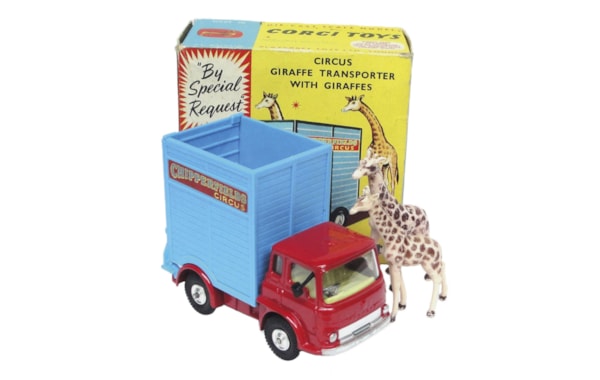 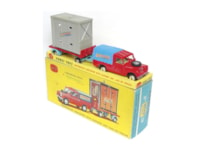 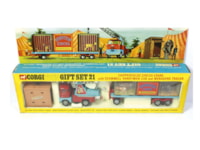 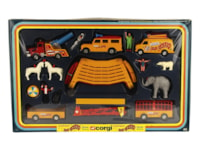 We experience the roar of the greasepaint and the smell of the crowd!

Where I grew up, a couple of miles outside Croydon, I never encountered a circus poster, far less the aroma of sawdust and wild animals. Circuses were unknown in greater London but all my generation knew about them through the media of comics and books. (Yes, we were of the era that read books…).

Circuses, of course, were something that toy manufacturers could capitalise on, although there was precious little available in the toyshops during the 1960s if you were keen on the Big Top and all that it entailed. Thus, if high wire acts and wild beast taming were your raison d’être, then you’d have had to persuade your elders to invest in Corgi’s offerings.

Its Chipperfield’s Circus range was based on reality, with the eponymous entertainment actually dating back to the 1600s, albeit in a slightly different format. When Corgi decided to unleash the contents of Chipperfield’s on to the public, it was probably a sound move; after all, the type of vehicles deployed lent themselves to bigger retail packages, which meant higher earnings. And the philosophy here was rather akin to that of the model railway world: once you’d acquired a couple of items, then you wanted some more. All of which was good news for the company’s accountants…

Chipperfield’s, with its exuberant sky blue and dark red livery, really caught the eye, and the colours alone must have been a good selling point. Okay, so you couldn’t actually obtain a Big Top marquee (although its play value would have been limited, given that it was covered); and there was a dearth of figurines to accompany the vehicles and animals; but despite these drawbacks, an assemblage of circus equipment, when laid out on the carpet, was like nothing else in a young owner’s toybox.

The first model of what would prove to be a popular range was introduced in late 1960 and the stage (both literally and metaphorically) was set.

That initial vehicle happens to be one of the most interesting models: the Scammell crane. Such heavy equipment was obviously desirable in the setting up of the circus tent and this is a lovely model. The real thing’s origins go back to the second world war, and this utilitarian vehicle would have more likely than not been converted for use by the circus. Available as a solo item or with a trailer, it immediately forms the centrepiece of any circus collection. By contrast, the later Handyman version, with its short chassis ad revised cab, looks less impressive; somehow, its rugged charm has disappeared. The Scammell turned out to be a steady seller, only finally making its exit in 1969; it would also exist in two mini Gift Sets, where it is paired with an animal trailer.

All of which brings us to a year later, when the first of the wild animals were catered for, with the arrival of the lion trailer. Looking back now, almost six decades on (yes, really), this was a dextrous and complex piece of engineering that involved wire bars, sliding plastic doors and operating side flaps. A couple of lions were included, all for the princely sum of 11s 6d (or 58p in today’s coin of the realm). I believe that dealer information, prior to its launch, mentioned polar bears as the initial occupants – maybe there was a problem in capturing the kings of the jungle.

The success of the Chipperfield’s line led to further releases, and so in 1962 Corgi took its doughty Mobile Shop, first produced way back in 1957, gave it a lick of new paint and applied some suitably circus artwork to the body and windows. The Booking Office, based on the Karrier Bantam body, was getting long in the tooth by then, but this was Corgi doing what it did best: repurposing existing material. This was recycling in its purest form. The same would recur later that year, when the Land Rover and trailer with an elephant box reached the toyshops; the animal box was also available separately as a kit, incidentally. This made use of probably the most re-imagined vehicle of the lot, for Corgi’s “Landie” can be found in khaki military guise, as well as that of wearing breakdown services livery and, of course, in plain unadorned civilian colours. Its blue canvas rear contrasted well with the red bodywork , while the red trailer was simply purloined from the No 101 Platform Trailer, which some will recall was often twinned with the Commer lorry of the 1950s. This self-same Land Rover would surface again in 1965 as the basis for the Chipperfield’s Parade vehicle (with a useful monkey thrown in for good measure).

Of course, some of these aforementioned models are not gift sets in the true sense of the word (despite some being multi-vehicle), but once they were out and about, then Corgi was able to jump into the marketplace with a collection of items, presenting the lucky recipient with an instant circus.

This also occurred in 1962, GS23 bringing all these models together under one umbrella, as it were. Great box art showed the contents to full advantage, although the dry, even and unsullied landscape depicted was taking some degree of artistic licence, if my experience of circus environs is anything to go by. Two years later, the set would undergo a sight modification in that the ageing Karrier Bantam failed its MOT and was ousted in favour of a giraffe truck, giving arguably more play value.

Of interest all these years on is the fact that the circus animals were not necessarily clones: the giraffes, for example, represent a parent and a youngster whilst the horses in the transporter (never a part of the Gift Set equation) again were not identical. The GS23 sales (in its various guises) totalled some 75,000 units; of course, individual circus items sold in far greater quantity than this, so today there are plenty in the marketplace for the collector.

In 1967 Corgi closed the Chipperfield’s ticket office and withdrew the GS23, although individual models could still be bought for some time after. A host of other themes occupied Corgi for the next decade or so but then in 1978, the circus suddenly reappeared on the village green. This time, though, Corgi addressed Chipperfield’s earlier shortcomings: a semi-built marquee was included in GS48, the Jean Richard Circus, which contained seating, a colourful backdrop, a variety of animals, a trapeze artist and a ring master and even a (working) human cannonball. Various existing models were retooled for this venture, notably the long wheelbase Landrover and the Chevrolet van. Moreover, there was even talk of executing a similar project for the Italian circus company Bardini, although nothing ever materialised. This red and yellow rendering of the Big Top would continue in production for some years thereafter. It wasn’t, perhaps, as eye-catching as the original Chipperfield’s confection but it looked good in its window box packaging.

Today, though, we live in a different age – but that shouldn’t prevent you enjoying either of these wonderfully evocative gift sets.