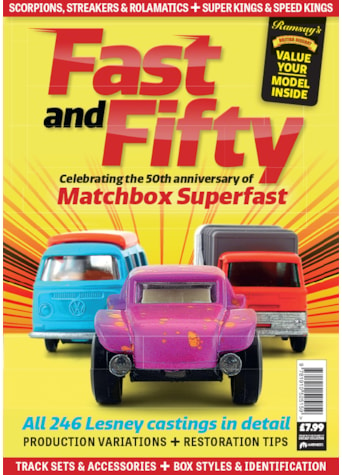 What's in this offer?

Ensure you never miss an issue of your favourite magazine by taking out a great value subscription.

What's in this Offer?

In 1969, Matchbox responded to the competition from Hot Wheels with its own range that featured low-friction ‘mag’ wheels.

Celebrating the 50th anniversary of the launch of the Superfast 1-75 series, Fast & Fifty focuses on the original Lesney era, from 1969 to 1982, covering every basic model released as well as taking a look at the accessories and ranges that were sold to complement and work with the models released. Sold in eye-catching packaging, the range became a huge success and is still hugely popular today.

Fast & Fifty is packed with information and evocative photography to truly bring back memories of a bygone era and act as a basis for the collector: