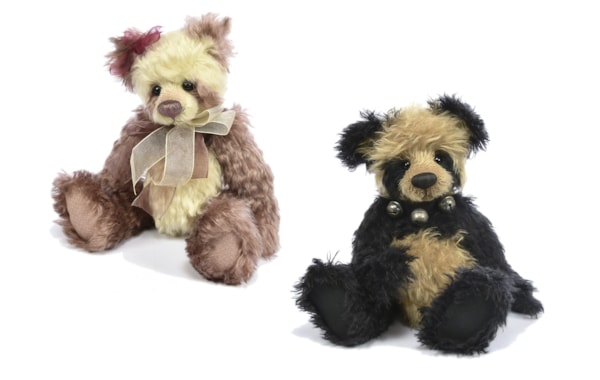 A collection of modern, limited-edition British Charlie Bears has sold at auction for over £58,500.

The group was sold over two auctions, the bulk of which was this week at Vectis Auctions in the North East of England. Somewhat surprisingly, the oldest of which was only 15 years old.

It is extremely unusual when a new collectable achieves anywhere near the dizzy heights in terms of value when compared to that of its older relations, but Charlie Bears are a British success story to be reckoned with.

The prices recorded included a world record for a Charlie Bear sold at an auction house - Lot No. 417 Charlie Isabelle Collection Poem panda bear which saw the buyer pay £2280 for the privilege of adopting him.

Other highlights include Dion, a more traditional black and white panda sporting a collar of bells selling for £1920; Tutti Frutti, who lived up to her name in ice cream shades of mohair was a very tasty £1200; and the adorable Cookie in chocolate and cream long pile, curly mohair was like a shot of expresso as he woke everyone up selling for £1,020 making huge returns in a very short time.

Not only have are these prices soared when compared to their RRP but have become one of the lockdown successes.  Last year Vectis sold Melody, a panda in subtle hues of dusky pink and ivory for a strong £432, now within 12 months she has now achieved £1440 treble her pre-sale estimate based on the last sold price.

Bidding for the bears was fierce, with multiple commission (pre-bids), telephone lines and internet platforms being a hive of activity with hundreds of bidders. The bears, many of which were UK exclusives and only available in very small limited-edition numbers, will now be shipped to new owners all over the world.