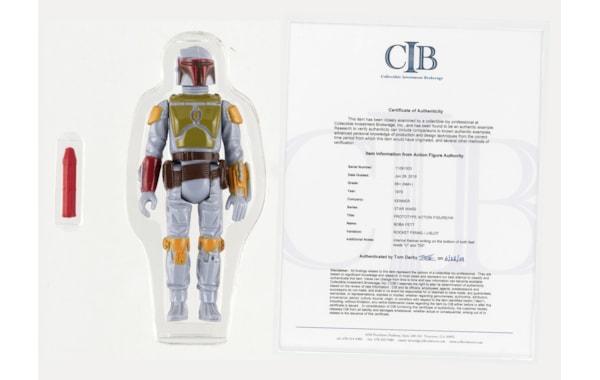 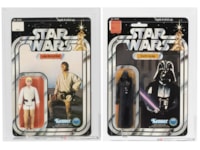 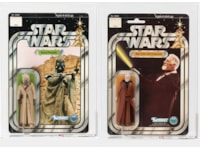 To understand why the Boba Fett J-slot rocket-firing prototype is so rare and important, it’s essential to know its history. Kenner’s Boba Fett prototype made its debut at the New York Toy Fair in 1979, but the design never made it into mass production due to concerns about the toy’s rocket-firing mechanism. For this reason, few prototypes ever made it into collectors’ hands.
The rocket-firing prototype is described either as an L-slot or J-slot type, referring to the shape of the firing mechanism on the figure’s back. The L-slot, which resembles a backward “L,” is the more commonly seen version. Quality issues arose with this variation when it was discovered that there wasn’t a tab to secure the mechanism when it was not firing. The J-slot design, with a slot shaped like a “J,” has a small catch to set the mechanism in a resting position when it is not in use.

The J-slot Boba Fett prototype offered by Hake’s is graded AFA 85+ NM+. The 3¾-inch figure is a fully painted engineering pilot with country of origin and copyright stamps, indicating it had reached the final phase of prototype development.
Originally, 80 to 100 Boba Fett prototypes were shipped to Kenner from Hong Kong for safety testing, and of those, approximately 24 to 26 examples of the J-slot variety are known to have survived. Several of the extant J-slots are in “rather rough condition,” according to Hake’s, due to their having undergone rigorous testing procedures that included heating, freezing, and more. Owing to the high-grade condition of Hake’s example, it is clear that the figure was not put through such harsh testing challenges. The only evidence that it went through any testing evaluations is the presence of indexing marks on the underside of the figure’s feet.
Also destined to land in the winners circle is a newly discovered Ben (Obi-Wan) Kenobi 12 Back-A AFA 70 EX+ double-telescoping action figure on a blister card with a white footer. From Kenner’s 1978 Star Wars toy line, this coveted rarity is estimated at $75,000-$100,000 (£58,000-£78,000). From the same toy line and similarly estimated at $75,000-$100,000, a Darth Vader 12 Back-A AFA 75+ EX+/NM double-telescoping action figure is one of few carded examples known to exist. Both the Ben Kenobi and Darth Vader are accompanied by notarized CIB LOAs. A third double-telescoping figure from the legendary 1978 Kenner release, a Star Wars Luke Skywalker 12 Back-C AFA 80 NM example on an unpunched card, could reach the $10,000-$20,000 (£12,000-£15,000) range.

12 May 2020
Tweets by Collectors Club Of Great Britain