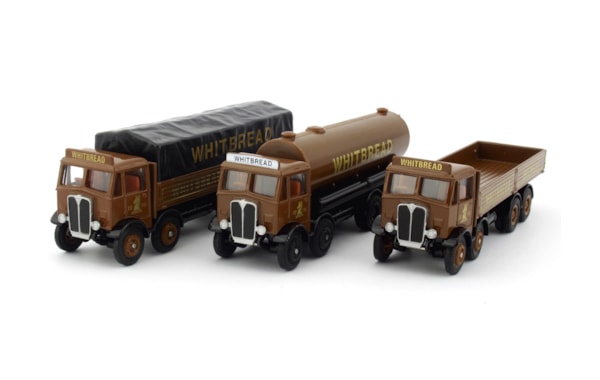 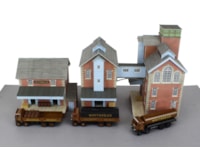 If you remember my diorama series from a little while ago, then you might recall a brewery buildings kit by Metcalfe being mentioned. It was shown in unmade form and I have to confess that I had originally intended for it to be fully made up but ran out of time in the run up to the article deadline. So here it is, finally finished and ready for my trio of Whitbread vehicles by EFE.

Metcalfe’s No PO229 OO/HO Brewery Kit is perfect for any suitable 1/76 scale vehicles and incorporates three separate buildings that can be arranged in a variety of ways, two of which can be linked by a walkway bridge. Each building has a loading platform, affording plenty of display options. Doors to these areas can be displayed either open or closed to suit and there are many accessories available to enhance the story on your diorama or layout – I’ve chosen some by Base-Toys: L02 36 Gallon Medium Barrels and L06 British Pallets.

The models shown here, manufactured by EFE in years gone by, all feature the same basic AEC Mammoth Major diecast cab with “Whitbread” header board and diecast 8-wheel chassis but have different bodies. No 10802 (released in November 1989) is a plain dropside diecast body bearing the “Whitbread Brewery” legend, whilst No 10802DL (released in August 1991 with DL denoting that it’s a De Luxe Series model) is the same model but with a tented load cover moulded in plastic, carrying additional “Whitbread” branding. The final model shown here is No 10606DL (released in January 1993) and this time the chassis carries a Whitbread-branded plastic tanker cylinder with plastic hoses to either side, and "Danger Keep Clear" on the sides of the pipe supports plus "Long Vehicle" signs to the rear. Interestingly, the front header board on this model features black text on a white background that stands out more than the other two.

All three vehicles carry Whitbread’s "Est. 1742" logo on both cab doors and to finish the whole display off I created a custom “Whitbread” sign for one of the buildings to tie everything in.