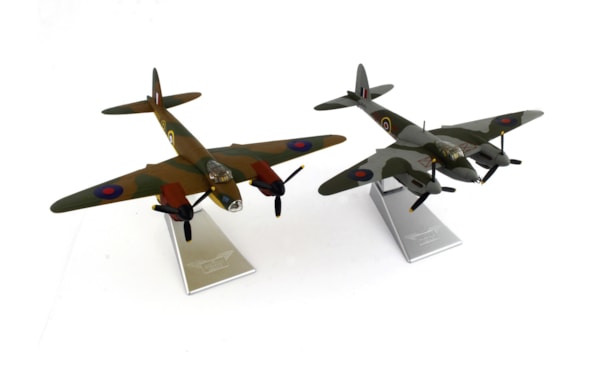 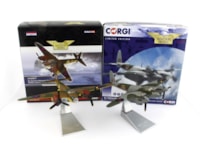 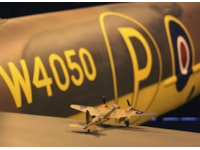 I’ve always had a huge fascination with all things de Havilland, and the Mosquito in particular. The sound of those twin Merlins howling in unison, powering that beautifully crafted wooden frame into the skies is quite something to see and hear in person.

So it will be no surprise to find a brace of Corgi’s creations in my collection. There are actually more, but these two are rather special to me as they have both, on separate occasions, accompanied me on visits to see the real versions.

In November 2015, the excellent de Havilland Museum celebrated the 75th anniversary of the Mosquito prototype’s first flight with a ceremonious roll-out on the correct day and at exactly the time the flight took place all those years ago. Corgi’s model was released in 2009 as No AA32817 and I’d taken it with me on the day. After the ceremony had taken place and the crowds had begun to dissipate, I was allowed to place my model on the tailplane of the real aircraft to take some photos. The full article appeared in the February 2016 issue, if you’d like to read more about this.

Fast forward to late 2018 and I was in discussion with Tony Agar, owner of HJ711. Now resident at the Lincs Aviation Heritage Centre, the aircraft has been lovingly restored by Tony and his team to taxying condition. I’d taken my Corgi model of the aircraft along with me and Tony kindly took a photo of me posing with it as a memento.