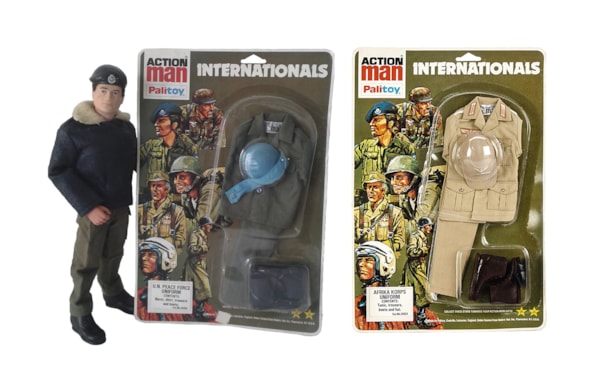 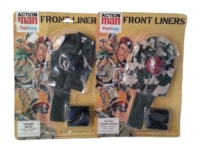 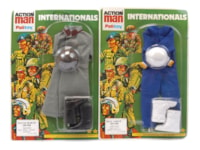 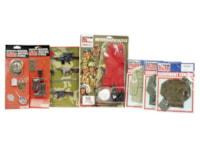 The late 1970s and early 80s were a tough time for Action Man. The emergence of Star Wars and the 3 ¾” action figure was the beginning of a gradual decline for Palitoy’s man of action.

The late 1970s and early 80s were a tough time for Action Man. The emergence of Star Wars and the 3 ¾” action figure was the beginning of a gradual decline for Palitoy’s man of action.  Brand new uniforms and accessories, updated versions of old favourites in new packaging arrangements, and of course a full space adventure series were all released during the ‘79 to ‘84 period, and this helped prolong the original Action Man’s army career.

Stripped of all weapons and equipment, both series purely concentrated on the uniform – jacket and trousers, or a jumpsuit for the pilots, helmet or hat and a pair of boots. The idea was you’d buy the uniform you fancied from the series and accessorise and arm him with other carded pieces from the Action Man range. There were already an abundance of Action Man weapons in the 1970s range, starting with the Equipment Centre collections on pale blue card backs,  followed by the red backed Quartermaster Stores and The Armoury range in the later 70s and 80s. Many kids, myself included, had plenty of weapons in their equipment locker already.  So arming Action Man wasn’t going to be a problem.

A key selling feature of the Internationals and Front Liners outfits was the price.  Retailing at around the £2.99 to £3.99 mark this put the pricing on a par with the Star Wars figures and brought them in closer to pocket money prices  -  or at least the sort of price I could manage every few weeks or so on my meagre funds through car washing and chores!

The Front Liners consisted of the Parachute Regiment, Military Police, Tank Commander (with brown jacket), Jungle Uniform, Commando, British Infantry and the Sailor Uniform. All these uniforms had been available in the Action Man range previously as part of larger more accessorized sets or on full figures in the case of the sailor.  The Front Liners Jungle camouflage outfit was the same style and cut as that previously found on Action Man’s team mate Tom Stone. The jacket has a pocket on the left breast and just one popper to fasten the front.

The Internationals series however is much more interesting as it brought several brand new uniforms to the range that were only ever available in this format. Collectors should be aware that these uniforms were also not available in the popular 40th anniversary range that was released in 2006. So they are well worth tracking down.

A 40th Anniversary German Paratrooper, also known as Fallschirmjager, was released but it had a very different camouflage outfit to the Internationals paratrooper. The Internationals German paratrooper had a long camouflage tunic with nice gold stud details to the lower hem.  Compared to the standard Stormtrooper helmet he also had a different shaped cut down helmet which had an eagle insignia with curve wings, rather than the more angular Wehrmacht version of the eagle badge. This is because the Fallschirmjager in Hitler’s Germany were part of the Luftwaffe rather than the regular army.

A version of the Afrika Korps uniform was also released on a locker box style Action Man packaging card with a helmet and all the accessories. But the Internationals series was the only version that came with a peaked Afrika Korps cap.

The Russian Infantry outfit was significantly different to the earlier Russian uniforms, dispensing with the fur lined hat in favour of a dark brown helmet and adding a long grey trench coat with burgundy epaulets and collar.

The US Marine uniform was also unique to the series. His shirt has the USMC (Marine Corps) badge and stripes to each arm. This outfit sits well with the US Paratrooper and US Machine Gunner outfits available elsewhere in the Action Man catalogue.

The UN Peace Force outfit has a unique blue beret with a UN badge. The badge is often missing these days as it was a sticker rather than a plastic pinned on badge more common to the standard berets. He also has a cool open necked short sleeved shirt and blue UN armband.

The Tank Commander was an unusual choice by Palitoy for the Internationals series since they also had a Tank Commander with the Front Liners. The Internationals Tank Commander does however have a unique navy ‘leather’ jacket not found elsewhere. Collectors beware though. Like many toys these weren’t made with longevity in mind. Several carded Tank Commanders I have seen have mould developing on the jacket. As if the material (which isn’t real leather!) has sweated out overtime. I actually partially opened one of the two carded examples I had to try and clean the white ‘frosting’ from the jacket.  It cleaned up okay but I also found the jacket was as stiff as a board and no longer wearable for Action Man.  The loose example I have, whilst still supple and not mouldy, has become quite flaky with a fine blue dust coming off on your hands. The brown Front Liners jackets seem to be ageing much better.

The Space Ranger is also unique. The blue jumpsuit with yellow and white cuffs, heavy white boots and helmet is a bit odd though. It lacks any real detail and to me doesn’t sit very well with the earlier astronaut outfits or later rubbery space uniforms. It was probably Action Man’s attempt to maintain a space related interest in all releases from this point forward?

Finally, the Jet Pilot. This is the only disappointing one from the series in so much as it is just the previously available Red Devil jumpsuit, helmet and boots. A fine outfit in its own right, but it brings nothing new to the series in my opinion. One suspects it was included as a ‘safe bet’ since the Red Devils were a popular Action Man outfit. Or equally as likely, Palitoy had an abundance of stock and this was a good way to use it up.  One can’t help thinking an International Japanese soldier or maybe an Italian or Arab soldier might have been a more interesting addition?

All in all though The Internationals is a fine series for collectors to hunt down for it’s unusual and unique aspects. Unopened carded examples also sit very well with the Front Liners series being of the same packaging format.
Prices are also quite reasonable on the collector’s market as several carded examples remained on store shelves and were sold off cheaply when the original Action Man series finished in the mid 80s. Popularity of the Action Man Deutsche Afrika Korps figures and vehicles means this outfit, as a carded example, often reaches a three figure price in the current market. The others can range from £30 to £80 subject to condition. I have picked up examples of slightly tatty looking, but sealed, cards for much less. Several pieces came out of the Beeches Toy shop find in 2015 which has also helped with recent supply.