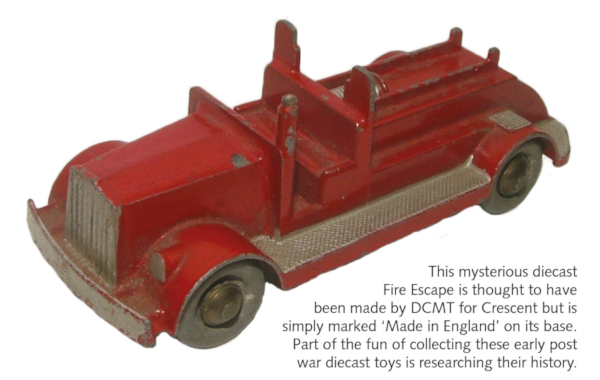 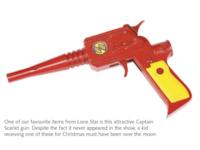 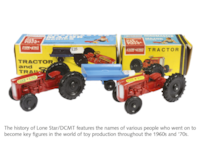 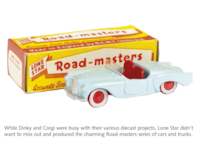 Die Casting Machine Tools Ltd (DCMT) has a unique place in the history of the British toy industry as it is at this company that two legendary figures in the world of diecasting first got to know each other. That friendship, formed between Rodney Smith and John (Jack) Odell, changed the face of the British toy industry following the birth and subsequent growth of Lesney from January 1947. But more of this fascinating link later.

Unlike Lesney/Matchbox, DCMT is not a household name in the world of toys. Many of its early toys were crude by today’s standards and some remain extremely obscure. Indeed, some early DCMT toys can only be identified by collectors with significant experience as they may not be marked. DCMT is far better known, however, for the toys it manufactured from 1949 under the banner of Lone Star.

DCMT was formed in June 1939 by Bob Mills who rented two large subterranean lock up spaces beneath The Bridge filling station in Green Lanes, North London, close to the North Circular Road. These were located down a side ramp where Mills simply called the business ‘Toys and Houseware’. He was a clever man designing and building his first diecasting machine himself, which he later sold on for a healthy £100 profit. During the war Mills made zinc-alloy castings for the Ministry of Defence and, after going into partnership with Sidney Ambridge, continued to make diecasting machines as well as taking on contract diecasting jobs of all descriptions. During the 1940s DCMT developed a good working relationship with Crescent Toys whose roots date back to 1922. As Crescent modernised its production from hollowcast lead to zinc-alloy diecasting, DCMT supplied it with its diecasting machines and took on contract diecasting of toys. It was this that led DCMT to venture into the toy market as a sole manufacturer in its own right. Known early creations included a range of diecast figures, simple flat-bed trucks and various motor cars including a Jaguar that came with a lifting ramp. Toys were in great demand after the war and the profit to be made from selling these somewhat crude diecastings caught the imagination of two DCMT employees with their own diecasting ambitions.

As previously mentioned, DCMT played a significant role in the formation of Lesney Toys as, by 1946, it employed both Jack Odell and Rodney Smith. As a teenager Jack Odell had experienced several jobs including that of a cinema projectionist. At 19 he was called up to the Royal Electrical and Mechanical Engineers (REME) and served in North Africa and Italy. When the war ended he went in search of a job and didn’t have to look very far. His parents rented out a flat above their own house on Weatherill Road, Muswell Hill, to Sidney Ambridge who just happened to be the co-founder of DCMT. Odell’s father William, who was a London bus driver, arranged for Jack Odell to be taken on by DCMT as a ‘die caster’ (machine operator) on a wage of 3s3d per hour. Odell worked at DCMT for nine months during which he learned a lot about the diecasting industry. Rodney Smith was a few years older than Jack Odell and had been employed by DCMT prior to being called up for service. He also served in the Armed Forces during hostilities and returned to his old job after the war. In 1946 Rodney Smith left DCMT and joined forces with namesake Leslie Smith to create Lesney Products. Several months later they were joined by Jack Odell and the rest, as they say is history. Lesney bought its first diecasting machines from DCMT who, by 1947, had expanded into new larger  premises just up the road from Bridge Filling Station at the River Works 152 Green Lanes, Palmers Green. These premises were subsequently enlarged as toy production grew and in an attempt to help market its products DCMT adopted the name SLIKKA PLAYTHINGS. The toys produced under this brand included a mobile crane and a cement mixer, which is very similar to the early Lesney version.

The company soon realised that it had to make the most of the post-war cowboy craze created by popular western films and TV series much loved by kids of the day. By the late 1940s toy rifles and pistols were becoming hugely popular playthings and in 1949 DCMT produced its first cowboy cap pistol calling it the ‘Lone Star’. It sold well and ‘Lone Star’ was subsequently adopted as the brand name for all its subsequent toys in place of ‘Slikka’. Toy cap-firing guns became the mainstay of Lone Star production over the next two decades with more than 220 different designs being made. These cap guns all had names linked to the Wild West such as Trail Boss, Wyatt Earp, Cisco Kid, Texas Ranger, Night-Rider, Law Man, Gunslinger, Maverick and Cowpoke. To promote its toy guns the company launched the ‘Lone Star Roadshow’ fronted by resident staff actor/cowboy Steve Larrabee and it also published the Lone Star Comic.

Along with the Lone Star guns, cap firing pistols and cowboy related toys came a large range of diecast road vehicles. These included the ‘Roadmasters’ series of cars and trucks, which included an articulated tanker and an RAC Land Rover and Mobile Office that I fondly remember having as a kid. The ‘Modern Army’ series rivalled some of the military toys being made by Dinky and the ‘Impy Toy’ range was launched to mirror Matchbox Toys along with Lone Star ‘Flyers’ which clearly competed with Matchbox ‘Superfast.’ Speed wheels were also fitted to the later ‘Kings of the Road’ and ‘Impy Major’ models made by Lone Star and the company also made model trains and a range of ‘000’ scale miniature locomotives and rolling stock.

The 1980s sadly saw the slow demise of DCMT/Lone Star. In October 1983 the company entered receivership, another victim of the crippling recession and difficult trading conditions in the British toy industry largely due to cheap foreign imports. There followed various takeovers and rescue attempts but the last remaining Lone Star factory finally closed its doors for the last time in June 1988. Of the old factories all but one have now been demolished and all that remains is the original Bridge Works in Green Lanes.

Company founder Bob Mills died in 1973 followed by Sidney Ambridge in 1980. While DCMT/Lone Star might not be as famous as the likes of Dinky and Corgi it nevertheless played an equally significant role in the rise of the great post-war British toy industry and it will never be forgotten by collectors throughout the world who are still as keen as ever to add those elusive Lone Star toys to their collection… myself included!