Corgi Innovations – Let there be light! 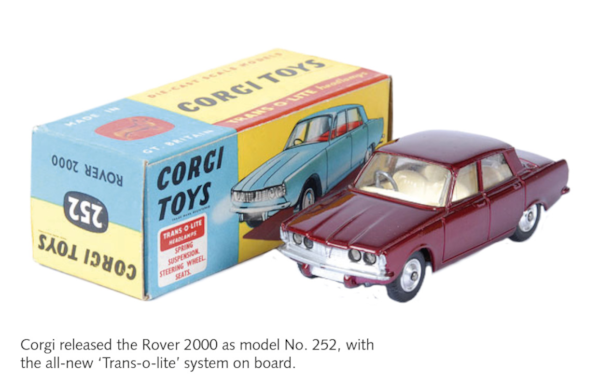 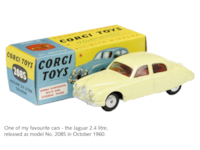 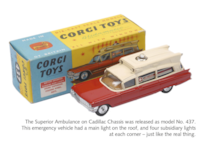 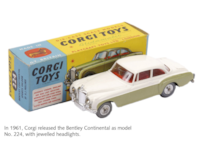 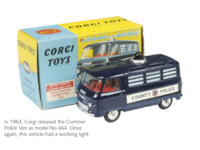 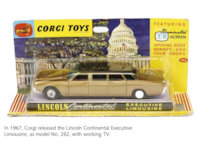 Throughout the production of Corgi toys, from the launch in 1956, to the present day, Corgi has always been one of the market leaders. The nature of innovation in manufacturing, is usually concerned with positive changes to a product and during the 1960s, Corgi was the master of innovation, as it was very often the first company to try a particular gadget or new feature in its toys.

At the launch of Corgi Toys in 1956, competition from other toy makers and manufacturers from around the world was just gaining pace. Many of these were producing similar diecast models, and so it was important right from the very beginning that Corgi set itself the highest of standards, both in relation to choice and quality.

The Corgi Toys ‘lights’ story begins with ‘silver trim’, and follows with landmark developments throughout the 1960s. All the cars up until 1961 had silver front lights, which were either painted or mask sprayed onto the car. As well as the lights, the spray mask would also fit around other areas of silver work and complete the process in one go. A good example, and one of my favourite cars, is the Jaguar 2.4 litre, released as model No. 208S in October 1960. This car had a number of refinements, including an interior and suspension. It was a popular car and achieved 256,000 sales. The front of this car had silver headlights, side lights, grille and bumpers. The headlights are well defined and perfectly adequate – until 1961.

In 1961, Corgi released the Bentley Continental as model No. 224. It appeared in two-tone black and silver, or apple green and cream. It was a very stylish, luxury car with an interior, opening boot, steering, chrome bumpers and grill. A car like this clearly needed a great deal more than silver paint for the headlights. Corgi fitted this model with ‘twinkly’ jewelled front headlights, and ruby red rear stop lights, which completed the car and maintained that first class look. I am sure that the combination of all the extra attractions on this car boosted the sales figures. It achieved 964,000 sales, and I have no doubt that the jewelled headlights played their part.

Headlights for saloon cars were to develop further but in the meantime, Corgi had its focus on another functional light altogether. In 1962, the Superior Ambulance on Cadillac Chassis was released as model No. 437. This emergency vehicle had a main light on the roof, and four subsidiary lights at each corner – just like the real thing. The flashing light was battery powered from the main body of the vehicle, and the four smaller lights were illuminated through transparent plastic rods from the main light source – a fantastic idea. Vehicles with working features were always very popular, and working lights certainly ‘ticked the box’. According to the Great Book of Corgi, this vehicle achieved 1,287,000 sales, until it was withdrawn in 1966.

In 1963, Corgi released the Commer Police Van as model No. 464. Once again, this vehicle had a working light. The model had a cam on the front axle, which rotated and connected then disconnected on each cycle. The battery was held in the main body of the van, where the grille and opaque covering of the side windows prevented any view of the interior. This first version of the Commer Police Van was available until 1967 and was then replaced with a new version with a blue light, which was released with the same model number. The Commer Police Van went on to achieve 438,000 sales.

We can now return to headlights, as in 1963, Corgi released the Rover 2000 as model No 252. This excellent model was issued in metallic blue with a red interior, or deep maroon with a cream interior. It had luxurious suspension but no opening features. It did, however, have the all-new ‘Trans-o-lite’ system on board. This was a fabulous new light system, which conveyed light from a ‘light box’ straight to the front headlights. The light box formed part of the rear window and looked like a 1960s de-mister attachment, which were very popular at the time. Corgi had developed the transparent pipes, which it had first used in the Superior Ambulance (No. 437), in order to give the Rover 2000 the most realistic front lights that were possible at the time. If a torch was used to shine light into the light box, then the headlights came full on. We managed to rig up a demonstration with the help of a few Corgi mechanics (out of shot). The Rover was an ideal choice for this new system as it had twin pairs of front lights, which emphasised the innovation very well indeed. The Rover achieved 384,000 sales, and was probably one of the few cars that were driven around the darker corners of the house with a torch in tow – great fun.

One of the most ingenious innovations was yet to come and in 1967 Corgi released the Lincoln Continental Executive Limousine, as model No. 262. Not only was this car very large, long and luxurious but it was full of special features. The vehicle was issued in either metallic bronze with a black textiled roof and deep red interior, or light blue with a beige roof and blue interior. Both cars were carpeted (flock sprayed) in their respective colours, and had jewelled headlights, an opening bonnet, boot, and doors. All the trim was in chrome, and deep inside for the rear passengers, there was a working television. According to the Great Book of Corgi, a ‘strip of opaque, coloured pictures’ was supplied with the car. Each of the pictures could be ‘inserted at the front of the screen to give the appearance of a colour TV’. Access to the battery unit was via the base of the car. What a great feature - no wonder that the car went on to achieve 516,000 sales, together with those from 1969.

The selected light features reveal the development and progress that was undertaken by Corgi Toys. In just seven years the use of light features had changed quite dramatically, much to the delight of collectors both young and old.